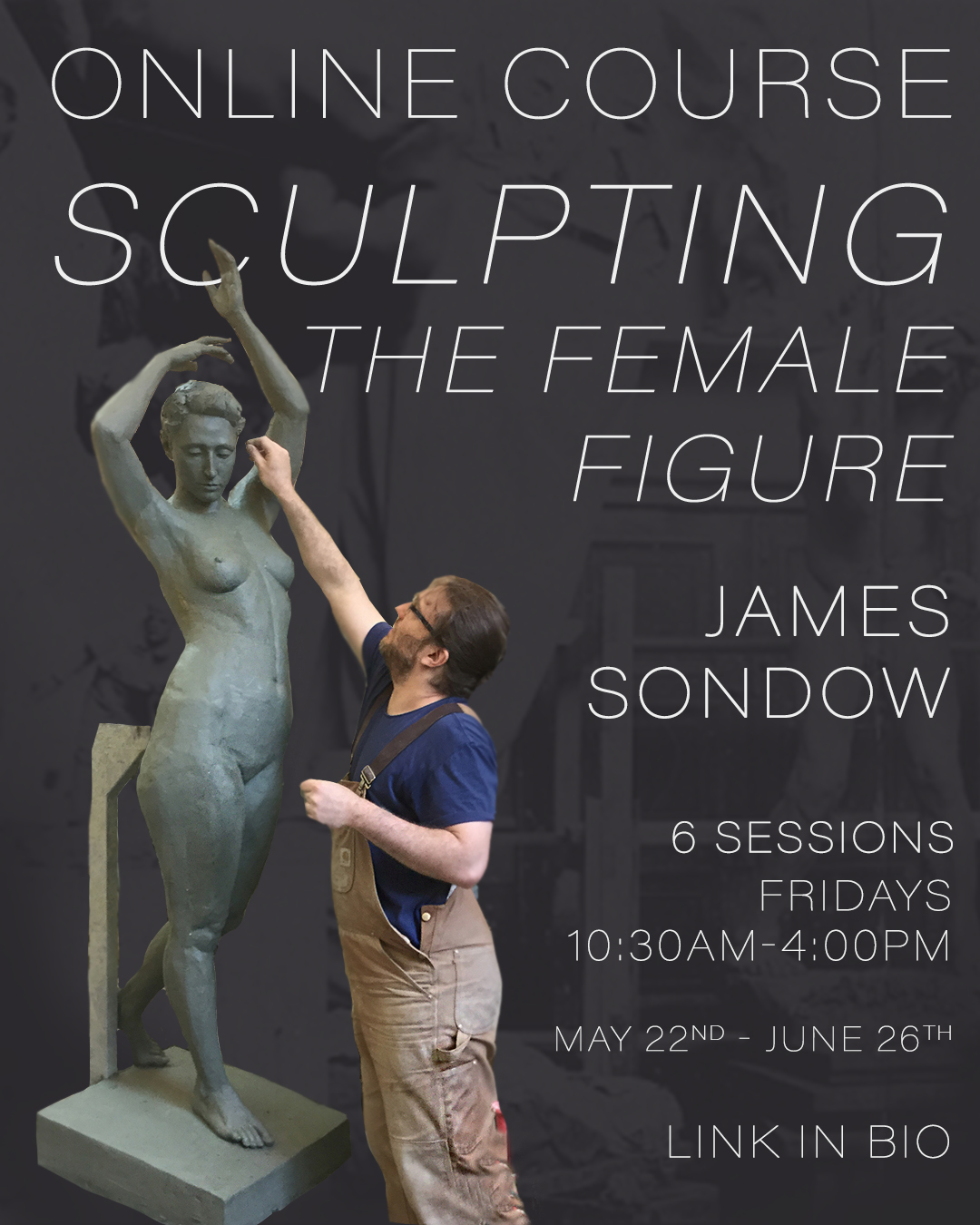 Working from a combination of master works and anatomical reference images along with instructor’s live demos on Zoom, students will create a 15-inch female figure.

Each class begins with a slide lecture focusing students’ attention on specific aspects of constructive anatomy in pursuit of large architectonic planes that unify, simplify, and create compositional rhythm to their sculpture.

Students will be guided in proportion, weight, and gesture, from the early armature stages and through the application of oil clay (plasticine) which will not harden, dry, or create any dust, and so can be worked easily at the students’ convenience, both in and outside of class without the need of spraying or wrapping.

During each 5-hour class the professor will give specific one-on-one ongoing verbal and visual critiques by drawing anatomical schematics on images of the students’ sculpture from various angles and comparing them to the master work. Students can use these personalized guides until they are ready for more feedback. Special attention will be given to composition.

A native New Yorker, James was first introduced to figurative drawing in his teens at the Art Students’ League and Hunter College High School. After graduating from Oberlin College in 1996, James taught art for the next decade at the Rubin Museum, Saint Ann’s School, and various public schools while refining his craft, studying life drawing, painting, and sculpture at Pratt, SVA, and the Art Students’ League. In 2003, he began his classical training in the Russian academic method at Bridgeview School of Fine Arts in New York City. Two years of intensive summer study at Russia’s premier art academy, the Ilya Repin Institute of Painting, Sculpture, and Architecture, cemented James’ affinity for their thorough program and their strict teaching methodology. Relocating to St. Petersburg from 2007 to 2012, James became the first American accepted to the Repin Institute’s sculpture department in over 20 years. After a three-year hiatus, in which he taught sculpture and drawing at the Beaux-Arts Academy in New York and Rome, he returned to the Repin Academy in Russia from 2015-2017 to become the only American to graduate with highest honors and be offered a solo show at the Academy. He has exhibited both drawing and sculpture in New York City and St. Petersburg and received various awards including the Gloria Medal at the National Sculpture Competition held at the New York Academy of Art.

***Supplies are not included, but there is a suggested supply list that can be purchased through the link below***