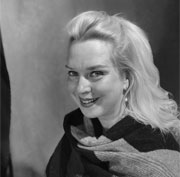 Anna Neis is an artist, educator and lecturer. Neis is a representational artist of contemporary myth working in a classical realist tradition. She holds MFA degrees from Moscow Art Academy and New York Academy of Art. With over 20 years teaching experience, Neis founded Gemma Art Foundation in 2005. Gemma Art Foundation was a non-profit educational institution dedicated to the education and promotion of fine arts and has now evolved into Princeton Academy of Art. Her works have been shown nationally and internationally including New York, San Francisco, Paris and Tokyo. Her work is in private collections, as well as the permanent collection of Arnot Art Museum in Elmira, New York.

“Teaching art is unique. Blending the didactic teaching of technical skills with the abstract idea of creativity is the most important part of helping students reach their potential.” Anna Neis 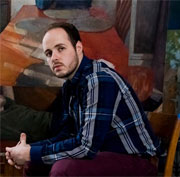 Originally from Odessa, Ukraine, Iliya immigrated to the United States in the early 1990’s with his family. From a young age Iliya pursued training in the arts in the Russian academic tradition. He studied in LaGuardia High School of Music and Art and Performing Art and in the Bridgeview School of Fine Arts in New York under the tutelage of professors trained in the art academies of the former Soviet Union. Iliya studied in St. Petersburg, Russia in the prestigious I.E. Repin State Institute of Painting, Sculpture, and Architecture from which he received his Masters of Fine Arts degree in painting.

In his paintings he aims to connect the Russian aesthetic with American sensibilities, creating images that go beyond their origins. He has been recipient of a number of prestigious scholarships and awards both in the United States and in Russia, winning the First Place award in the American Portrait Society’s International Portrait Competition. Iliya was selected to develop his design for a public monument for Icon Bay Residences in Miami, Florida in collaboration with The Related Group architecture firm. He was recently a Third Place winner of the Alpine Fellowship Fine Art Competition.

Iliya Mirochnik also actively teaches. He has given workshops and lectures in such institutions as Ringling College of Art and Design, Del Mar College, Los Angeles Academy of Figurative Art, Florence Academy of Art, Grand Central Atelier, The Academy of Realist Art Boston, and many others. Currently, Iliya resides in Brooklyn, New York.

A native New Yorker, James was first introduced to figurative drawing in his teens at the Art Student’s League and Hunter College High School. After graduating from Oberlin College in 1996, James taught art for the next decade at the Rubin Museum, Saint Anna’s School, and various public schools while refining his craft, studying life drawing, painting, and sculpture at Pratt, SVA, and the Art Student’s League. In 2003, he began his classical training in the Russian academic method at Bridgeview School of Fine Arts in New York City. Two years of intensive summer study at Russia’s premier art academy, the Ilya Repin Institute of Painting, Sculpture, and Architecture, cemented James’ affinity for their thorough program and their strict teaching methodology. Relocating to St. Petersburg from 2007 to 2012, James became the first American accepted to the Repin Institute’s sculpture department in over 20 years. After a three-year hiatus, in which he taught sculpture and drawing at the Beaux-Arts Academy in New York and Rome, he returned to the Repin Academy in Russia from 2015-2017 to become the only American to graduate with highest honors and be offered a solo show at the Academy. He has exhibited both drawing and sculpture in New York City and St. Petersburg and received various awards including the Gloria Medal at the National Sculpture Competition held at the New York Academy of Art. 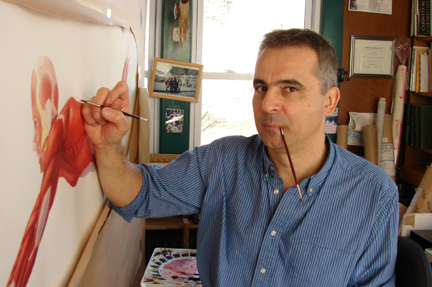 Roberto has taught at the Yard School of Art, Bloomfield College, Drew University: Caspersen Graduate School and presently the New York Academy of Art, Pennsylvania Academy of Art as well as the University of the Arts.

-2018, May & October issues of Artists Magazine

-2009, Drawing–The Winter 2009 issue of Drawing magazine, an American Artist
publication, features a 10-page article on my work including images and a
interview.

Aleksandr Budayev was born in 1988 in Minsk, Belarus. He began studying art in his early childhood which was quite characteristic for the post soviet system of education.

In 2008 he received his BFA from Minsk State Art School and was admitted to the prestigious Repin Academy of Fine Arts and Architecture in St. Petersburg, Russia. Since the Repin Academy’s inception, it has been known as one of the worlds most rigorous art schools. Its students learn from instructors trained in a lasting tradition relatively unchanged for over 250 years. Upon graduation from the Academy he joined Minsk State Art College in Belarus as a professor of drawing, painting and design for undergraduate students.

Sasha exhibited at numerous galleries in Russia and Europe. His solo show “On the Unattainable Presence” took place in 2016 in St. Petersburg.

In 2018 he emigrated with his family to the US and settled in Philadelphia. He currently teaches at Princeton Academy of Art as well as the Bridgeview School of Fine Arts in NYC.